We are pleased to announce that Nutrit Meal Replacement is starting a Crowdtilt Campaign for its initial production run.

On the heals of the successful campaign for Soylent, Nutrit promises a meal replacement product that has been totally reimagined. Nutrit provides a complete days nutrition while helping a person avoid processed ingredients, soy, wheat, dairy, GMOs, and Dairy. Nutrit is made up of organic proteins and fats, flavored with organic cocoa. Nutrit costs less than fast food, is easier to make than instant noodles, and tastes similar to chocolate milk. 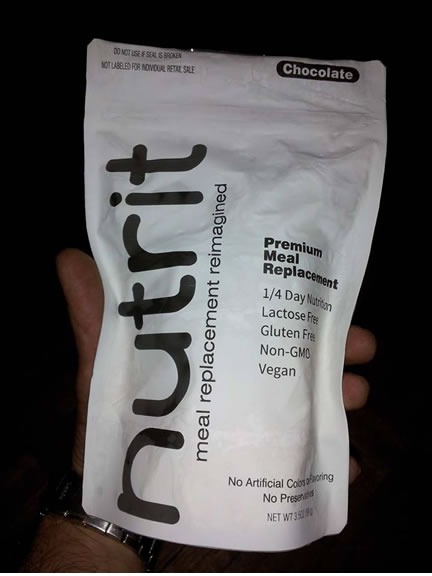 Meal replacement as an idea is a sound one. In a fast paced society, its hard to avoid problem ingredients and at the same time get the nutrition one requires to stay healthy. Its all too easy, in a pinch, to reach for something in a vending machine or fall back on take out food. To date, meal replacement products and protein concoctions offer an unmeasured nutrient value, and mostly contain ingredients that can cause inflammation. Nutrit has solved those problems by being an easy mix powder, that offers an organic, non-GMO ingredient list that mirrors RDA requirements.

Nutrits Crowdtilt campaign is primarily being undertaken to provide funds to meet our vendors initial minimum order quantities. The merits of this product stand on there own, and we feel it is important to get it out there. Nutrit can help the average person avoid problem ingredients, and control calorie intake, all while getting more complete nutrition than is afforded by a standard diet.

Find out more at our site; www.nutritmr.com and get involved at:https://www.crowdtilt.com/campaigns/nutrit.
Only with your help can we bring this truly novel product to market and the world.

New images released by Lloydspharmacy show how the UK’s hayfever time bomb is set to explode within the coming years. Currently, the condition affects around a quarter of the UK population, one of the highest prevalence rates for hayfever in the world. By 2040, up to 28 million people will have hayfever due to severe pollen seasons caused by climate change.

As hayfever is already one of the most common forms of allergy, with almost 12 million people in the UK affected, Lloydspharmacy has made its full report and hayfever maps of the UK available for sufferers to download through its website.

Chris Frost, head of medicines at Lloydspharmacy, said: “Increasingly we are going to need treatments which help people to reduce their susceptibility to hayfever in the first place rather than simply alleviate the symptoms.

“A study conducted by the National Pollen and Aerobiology Research Unit, and published online by the Current Medical and Research Opinion concluded that the Lloydspharmacy Hayfever Reliever significantly reduced the main symptoms of hayfever – sneezing, runny nose, watering eyes and an itchy palate. In fact it’s so effective some people may feel a reduction in hayfever symptoms after using it just a few times. This device has been clinically proven to help to reduce susceptibility to some types of pollens, making it very useful for the severe pollen seasons forecast over the next ten to fifty years.”

UK areas least susceptible to increases in allergenic pollen loads include coastal areas, especially in the west. The further north one goes, the shorter the growing season and the shorter the pollen seasons, causing less misery for hayfever sufferers. Highland and moor land areas are good places for hayfever sufferers as the type of vegetation there produces less pollen.

About Lloydspharmacy
Lloydspharmacy has around 1700 pharmacies across the UK. These are based predominantly in community and health centre locations. The company employs over 16,000 staff and dispenses over 145 million prescription items annually. Lloydspharmacy which is a community pharmacy has primary care at the heart of its business. This is why it has launched a range of products aimed at improving community health such as affordable blood pressure monitors and allergy relievers, as well as a suite of convenient professional health check services including free blood pressure and diabetes testing, and cholesterol and heart checks in the comfort of a private consultation room. Lloydspharmacy is the trading name of Lloydspharmacy Ltd, a wholly owned subsidiary of Celesio AG based in Stuttgart. Celesio is the leading pharmaceutical distribution company in Europe and is represented in 16 countries. With its three divisions, Celesio Wholesale, Celesio Pharmacies and Celesio Solutions, the group covers the entire scope of pharmaceutical trade and pharmaceutical-related services.