The tennis world has seen many comebacks in the past but none as unlikely as this one. After 6 years Dennis Simsek a professional tennis player and teaching pro on the ATP tour has naturally been able to overcome Generalized Anxiety Disorder and Panic Disorder, after being moments from taking his own life. Emergency visits before and after important tennis matches, intense physical sensations that resembled serious illnesses during matches, and overwhelming fearful thoughts were just a few of the personal mental and physical battles. 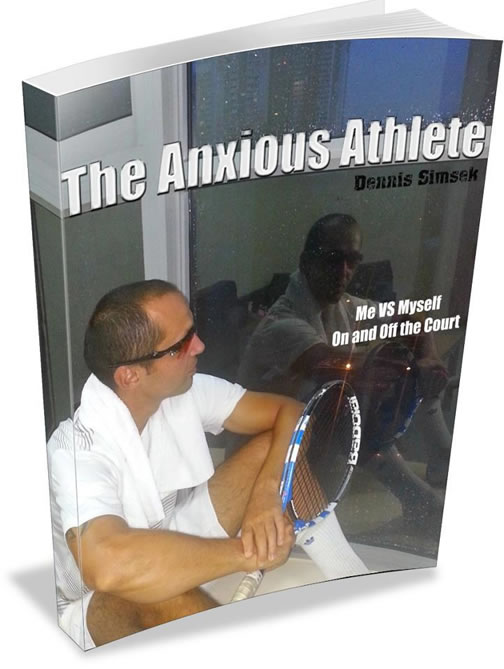 The ‘Me vs Myself On & Off The Court’ eBook outlines natural and unconventional ways Dennis overcame his mental illnesses. The coping strategies such as anti anxiety pills were only a short term fix that didn’t lead to long term recovery, and this is causing a major roadblock for people suffering from intense panic and anxiety these days. The ups and downs of this inspirational story will give readers a glimpse into the life of a professional athlete that feared everything from crowded areas to up tempo music. Readers will be able to relate to these stories, gain strength to stay motivated to face their fears, and reach their dreams through my online blogs and 30 day fear eliminator challenge set to launch on Jan 1st.

This eBook as well as the many interactive tools were launched through The Anxious Athlete website on Dec 15th, and can be purchased through the website below. I am hoping you will be able to see the enourmous benefits that athletes and non athletes who suffer with mental illnesses will gain from reading this book.

Recently, scientists at the Weill Cornell Medical School were able to recreate the symptoms of Parkinson’s disease in mice, leading some to believe that a breakthrough in treating the ailment could be just around the corner.

According to a study in the journal Nature Neuroscience, the research involved creating an animal model of Parkinson’s in mice so that scientists can focus on preventing the progression of the disease rather than just on treating its symptoms.

“This research is a huge step for the Parkinson’s community,” says Kay Mixson Jenkins, author of Who Is Pee Dee? Explaining Parkinson’s Disease to a Child. “With efforts like these, Parkinson’s patients have hope that funding and time are going into meaningful steps towards an eventual cure.”

The book follows a young boy named Colt as he tries to deal with his mother’s illness. It’s the kind of story Ms. Jenkins hopes will be made obsolete by the research being done with mice at Weill Cornell.

“I hope that researchers continue to get funding both private and public,” says Ms. Jenkins, whose book includes a discussion of some of the following symptoms:
• The constant fatigue created by the struggle to control body movement.
• The loss of coordination when doing even simple tasks
• The anger and resentment that can come from feeling overwhelmed

For more information, contact the author directly via kmj@ParkinsonsInThePark.org.